The Errant Bodies project space is operating under a new name - Errant Sound. You can find our activities here: https://errantsound.wordpress.com 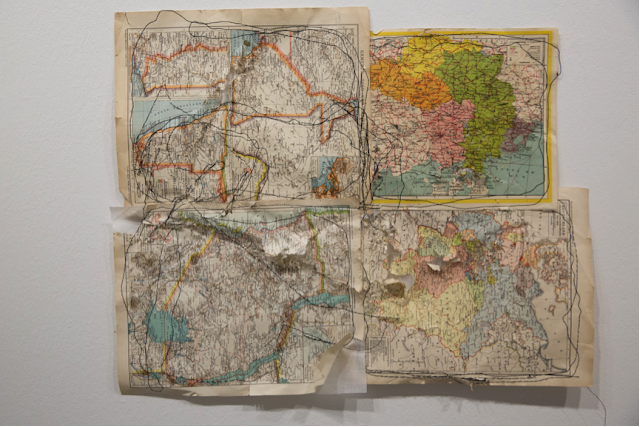 ‘Map Series’ is a performance-installation on colonialism, in which the artist considers her identity as a Portuguese citizen facing a post-colonial context. In this performance-installation, Mendes stitches old paper maps of the former colonies stitches old paper maps of the former German colonies using a sewing machine. From Namibia to the Samoa islands, see the rise and fail of an empire. Part experiment, part musical composition, Map Series makes you to think: what is an empire today?

The performance ‘Map Series happens in the frame of the Performing Arts Festival Berlin, 23-29th May, 2016.

Tickets & Info available online
https://www.performingarts-festival.de/programm/produktionen/map_series_81/
-
Ana Mendes is an artist and writer, whose work deals with issues of language, memory and identity.

Christina Shirley is a radio artist and sound designer, founder of the project ‘Plants and Empire’, also part of the collective ‘SissiFM’.

The Berlin Performing Arts Festival is organized by LAFT Berlin in cooperation with the performance venues HAU Hebbel am Ufer, Sophiensaele, Ballhaus Ost and Theaterdiscounter. The Berlin Performing Arts Festival organized by LAFT Berlin is supported by the State of Berlin - Senate Chancellery (Cultural Affairs) from funds of the European Fund for Regional Development (EFRE) within the program "Promoting the Innovation Potential in Culture II (INP II)". 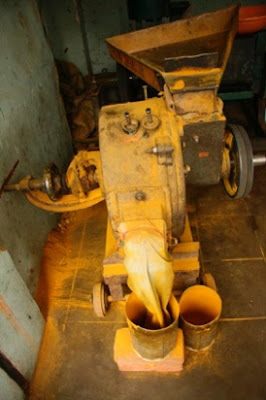 An exhibition and presentation of sound and experience in Chennai, India from Jeremy Woodruff and Susanne Matsche, new works exhibited from Nakul Krishnamurthy, Sukanyan Sunthareswaran, and Zeeshan Nabi.

Jeremy Woodruff and Susanne Matsché offer reflections on 20 months of living in India with sounds and images recorded there; how life and time is differently manifested with a series of festivals as markers of social life; how time flows differently through a round syllabary.
Days after the Assembly Election in Tamil Nadu, work by representatives of a new generation of young Indian composers and artists will be presented, former students of the KM Music Conservatory, that each contend in different ways with the current political climate in India under the BJP government and in Tamil Nadu under the AIADMK.  Sounds of election booths from a few days ago, sounds of rickshaws, sounds of vendors and funeral processions are featured, among others. Jeremy Woodruff presents the collaborative blog: “Chennaisonic”
Lastly, “Ninnu-kori”, a transcription of eight versions of the same South Indian composition in Mohanam Raga will be premiered in an electronic version. A second graphic realisation shows the way some patterns of Tamil speech echo this particular raga.
Admission free; donations welcome.
16 comments:

Despite his extensive oeuvre of more than 40 radio art pieces he still seems to be a hidden hero. We will listen to
The Dreams, one of the first pieces with an experimental use of speech fragments, Radioville. Metropolis London,
an unusual city soundscape based on sounds of the London Tube and Moviola, based on sound bites of film reels
processed in an old "moviola", a device for analogue film editing. (For these pieces no German is required)

Barry Bermange was born in London 1933, where he still lives. He developed his first radio pieces in the BBC Radiophonic
workshop. His work became more and more musical and abstract. Many of his pathbreaking pieces were produced in Germany by WDR and SWR. Three times he was awarded with the renowned Karl-Sczuka-Preis for radio art.

Errant Bodies Sound Art Space / focusing on experimental work and research on sound through exhibition,
performance, fieldwork, and text. The project space is organized by a working group consisting of Berlin-based artists,
academics, curators, and writers. For more information contact: eb@errantbodies.org and
http://errantbodies.org/soundartspace/piratepublic.html
No comments:

In her lecture performance 'À travers le savon' Ines Lechleitner explores the everyday object of Die Seife, the soap,
through smell, texture, repetition and associations. The process of metamorphosis began through the reading of
Francis Ponge's book 'Le Savon' and his detailed descriptions and excessive treatment of the soap "…einem lächerlichen
Gegenstand, der endlos schäumt." In the slide show Zitronen-Wal-Seife the soap becomes a lemon which becomes
a whale in order to turn into a soap and disappear.

Serge Baghdassarians and Boris Baltschun present their latest radio piece Ate feat. Ed D.: obey God. It will be the
premiere of the reworked English language version. Furthermore their installation Memory Palace will be on display
in the basement space. Ate feat. Ed D.: obey God is a radio play based on a single sentence and it’s evanescent
character. This character with a 4-letter name is brought to life with the help of soundtracks of video tutorials,
religious movies, talkshows, an interview and a singing text-to-speech system. Memory Palace is an installation
conceived for a 'movie theatre' where the usual screen is replaced by a circle of modified guitar tuners with led
displays. In reference to a common mnemonic of the standard guitar tuning these tuners simultaneously symbolize
the circular structure of the sentence and the recurring (and potentially endless) need to tune.

Rosetta’s Plasma Consortium (RPC) has uncovered a mysterious ‘song’ that Comet 67P/Churyumov-Gerasimenko is singing into space. The comet seems to be emitting a ‘song’ in the form of oscillations in the magnetic field in the comet’s environment. It is being sung at 40-50 millihertz, far below human hearing, which typically picks up sound between 20 Hz and 20 kHz. To make the music audible to the human ear, the frequencies have been increased in this recording.