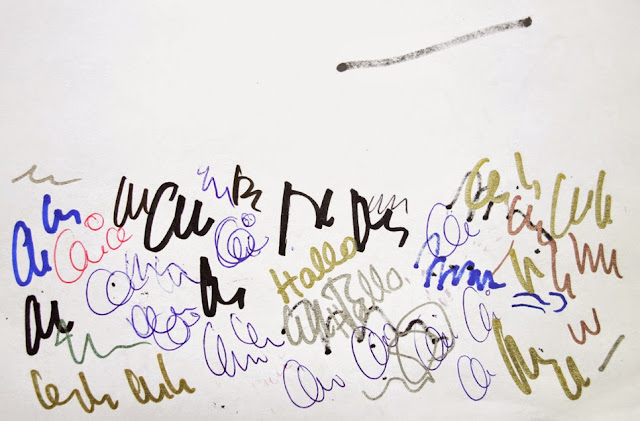 Between 2013 and 2014 the artists have collected a huge amount of pen test writing paper sheets in stationary shops all around the world, fascinated by the variety of drawn lines and written words, as if they would contain sound and movement. They are objets trouvés or objets volés that are recontextualized as graphic score and visual poetry. These paper sheets represent anonymous traces of unconscious/conscious writing. Their use is just for testing pens and most of the time people don’t intend to express anything at all. But the diverse figures express sometimes public/private statements and in some cases they even reveal deep emotions. They are approximations of letters, like “pre-letter”, furthermore they can be read as signs that refer to a linguistic and cultural background. There can be found some characteristic aspects in each country which reflect the socially constructed physicality of writing.

Tomomi Adachi and Alessandra Eramo show an installation of several hundreds of paper sheets and they create a musical and poetical vocal performance interpreting a selection of drawings. 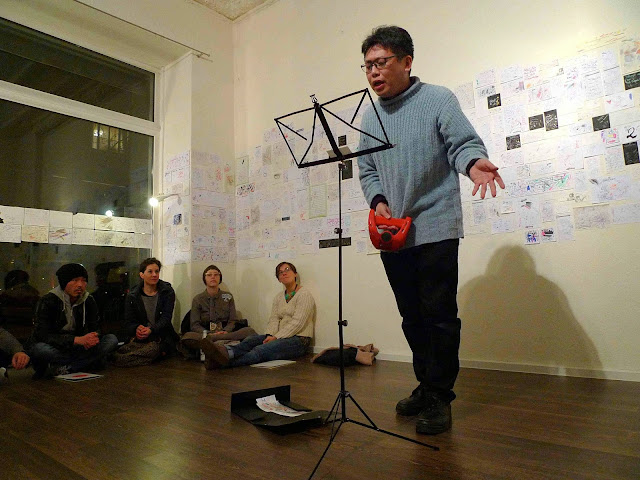 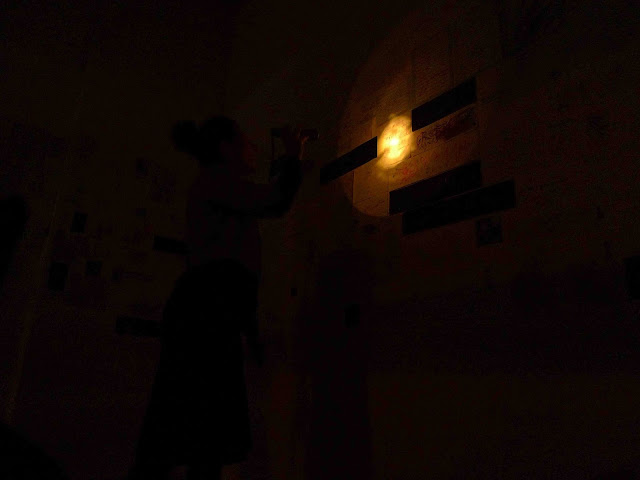 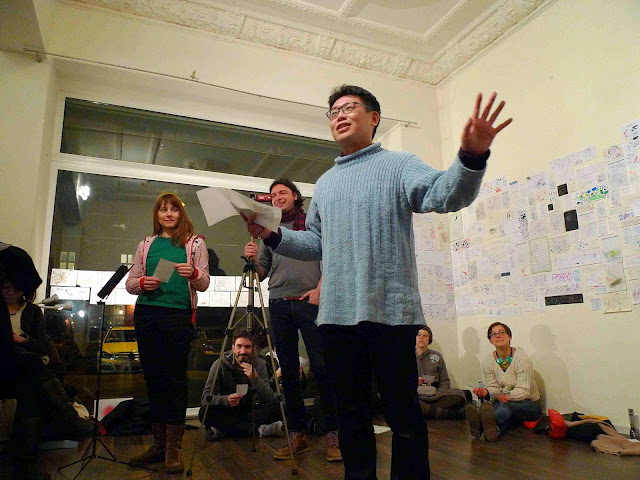 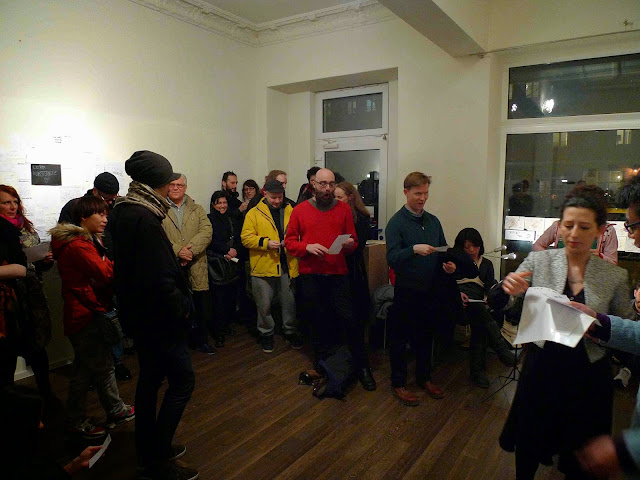 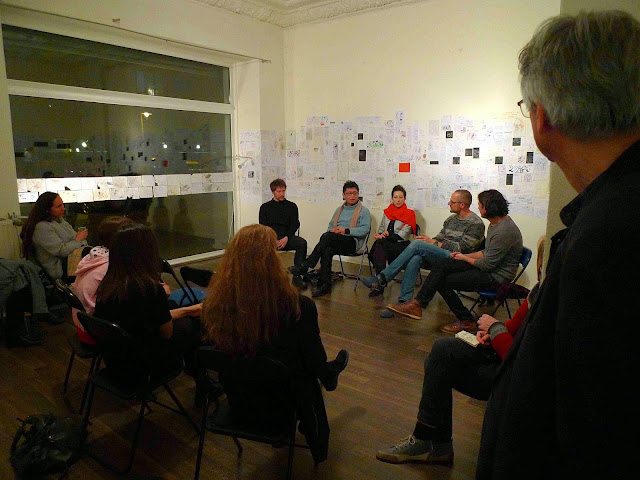 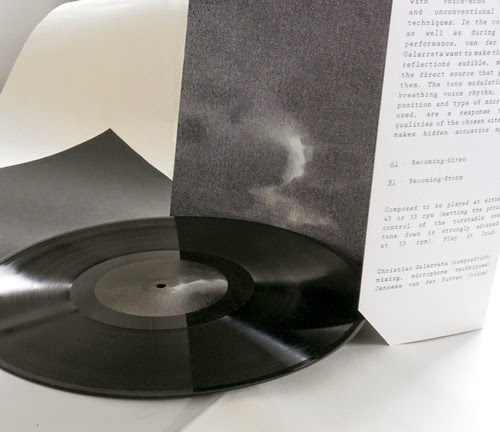 Between 1 and 5 March Christian Galarreta and Janneke van der Putten come to Berlin in a collaboration between the platforms Errant Bodies and Ausland. In Errant Bodies they will work in continuation of their project 'Invisible Architecture' and explore the acoustics of the project space, to see its possibilities for a performance. Previously they explored the acoustic architecture of a tower through its surrounding sounds, subtle acoustic phenomena and the human voice. Resonances and reverberations were emphasized and prolonged through vocal interaction with sound space and unconventional microphone techniques. The compositions have been published in a LP with silkscreened cover (edition of 300) by label Aloardi in July 2014.


In collaboration with Ausland /
Ausland concert with the artists
Thursday 5 March - 21:00h

-
Chrs Galarreta (Peru). Very active in the South American experimental scene since 1995. The sublime and the uncertainty are present in his actions. He is mostly interested in the exploration of life and its acoustics to create immersive live experiences, experimental songs and des-compositions, hacking the human perception of space-time as a form of civil disobedience and social auto-reorganization. Galarreta comes from an autodidact formation. In 2013 he developed his independent projects at the Institute of Sonology in The Hague. Today he lives between Peru, France and The Netherlands. His work has taken him to make concerts, installations, performances, lectures and workshops in Latin America and Europe such as Academy of Fine Arts, (Vienna, 2013 & 2014), Plateforme Intermédia / La Fabrique (Nantes, 2011) and Aural – Sound Art Festival (México D.F., 2009). Galarreta is founder and member of the independent label and association Aloardi (since 1998) and of bands like Sajjra (current solo experimental-song project), DiosMeHaViolado, Evamuss (as soloist), Azucena Kantrix (with Wilder Gonzales), Tica (with Fabiola Vasquez) in Peru, Miasma (with Sergio Sanchez T.) in Mexico, 50 Otages (with Mathieu Finisterre, Bernard Bruit and Julien Ottavi) in France among others. He collaborated with artists, labels and collectives around the world such as Gabriel Castillo, Zbigniew Karkowski, Jorge Castro (Cornucopia), Leo Sabatto (Armenia), Janneke van der Putten, Pablo Reche, Anton Mobin, David Kraapoola, Dave Phillips, Jorge Haro, Sub Rosa, Microbio Records, APO33, Platoniq, Sonic Art Networks, Manuel Rocha Iturbide, Tsonami, Sebastian Ortiz and Ignacio Rus.
ww.sajjra.net

Janneke van der Putten presented her site-specific installations, voice-based performances, sound pieces, participatory events and workshops at among others: ‘Recreation Ground', W139, Amsterdam (2013), ‘Urban Modes of Listening’, Tuned City, Qo2, Brussels (2013), 'Handmade Homegrown 8', Theater Dakota, The Hague, NL (2013); 'Three Artists Walk Into A Bar...', de Appel, Amsterdam (2012) and 'NMElindo Radio', São Paulo Art Biennial, São Paulo, BR (2012). Upcoming is a solo exhibition of her work in TENT, Rotterdam (summer 2015). Recently her collaboration with composer / musician Christian Galarreta was presented at among others 'Inner Space', Extrapool, Nijmegen, NL (2014), Tsonami Festival, Valparaiso, CHI (2014) and Asimtria Festival, Arequipa, PE (2015). Between November 2014 and February 2015 van der Putten took part of the residency programs of Collective Aloardi and Cultural Association Tupac, based in Lima, Peru. In the winter of 2013-2014 van der Putten was artist in residence at the Castle, Centre International d'Art et du Paysage at the Île de Vassivière in France, where she continued her work and daily practice 'All Begins With A: inspired by the SUNRISE'. Janneke's researches have been supported by the Mondriaan Fund. Previously van der Putten worked with different people, from a hunter to a sonic marine engineer, as well as with choirs and colleagues, a.o. with Gabriëlle Barros Martins and Rory Pilgrim. In 2013 Janneke did the vocals of Siavash Akhlaghi's electroacoustic work for Wave Field Synthesis, which premiered at the Institute of Sonology.   She holds a Master of Music from the Master Artistic Research at the Royal Conservatory & Royal Art Academy, The Hague (2013), a Bachelor degree with Honors from the Textile department at the Gerrit Rietveld Academie in Amsterdam (2009), studied at the San Francisco Art Institute in 2008 and learned from the Indian classical Dhrupad singing by Amelia Cuni and Marianne Svasek since 2009. Janneke van der Putten is born in Amsterdam and currently lives in Rotterdam, The Netherlands.
www.jannekevanderputten.nl
2 comments:
Newer Posts Older Posts Home
Subscribe to: Posts (Atom)
Kollwitzstrasse 97
10435 Berlin
errantbodies.org