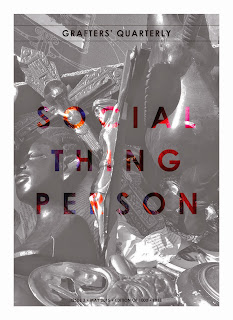 Celebration launch: Grafters’ Quarterly Issue No.3 – Social Thing Person
with a presentation by the editors

The third issue of Grafters’ Quarterly, Social Thing Person, revolves around the axis of fetishism, particularly binding together conceptions of the spiritual and commodity fetish. The term is traced through its varying usages and its now seemingly inherent prejudices - prejudices also present in Marx’s usage of ‘fetishism’ when expressing the power commodities hold over consumers (who in turn deny such bewitchment). Contributors to this issue have tackled the subject both by commenting upon and enacting within configurations of the powerful ‘social things’ in which they find themselves enmeshed.

Grafters’ Quarterly is an English-language newspaper shaping a forum for engaged attitudes and was formed to address the renewal of theorising as an activity of initial discovery by addressing what we perceive to be a lack of rigorous, considered activity adjacent to what is often contemptuously partitioned as ‘theory’. Concerned by this attitude, one particularly prevalent in art, Grafters’ Quarterly is a space in which participants from differing fields can develop their writing and ideas rigorously without the stylistic restrictions of academia.

Historically, newspapers have acted as congregators of social conscience, proliferating a vocabulary for current events. We feel it is still a forum with which such sympathy can be practiced through a consideration of the coalesced perspectives and activities of focussed and engaged contributors, the newspaper being open to others without dictating a hyper-rapid mode of address and information relay, but by insisting on a sense of urgency, believing in the persistence of what is presented.